Gino Bartali is by now renowned throughout the whole world. He is remembered in many ways, some of them inconsistent. An honest, direct and fair way of remembering him is to think of him on his bike. The Israel Cycling Academy team is a UCI Pro Continental team founded in 2015 and based in Israel. Team is composed of cyclists from twelve different nations. Youngsters from New Zealand, America and Israel are part of this group…and they are all here together, today.

The cyclists retrace the route Firenze-Assisi, in memory of Gino Bartali.

The idea of retracing the itinerary that my grandfather covered so many times is something I thought would happen at some point. It is not an original idea. What makes it unique, is the fact that those who are retracing this itinerary are young peoplefrom different cultures and ethnic backgrounds, who are willing to travel a long way in order to take part in this race which brings them together in order to celebrate this great champion. 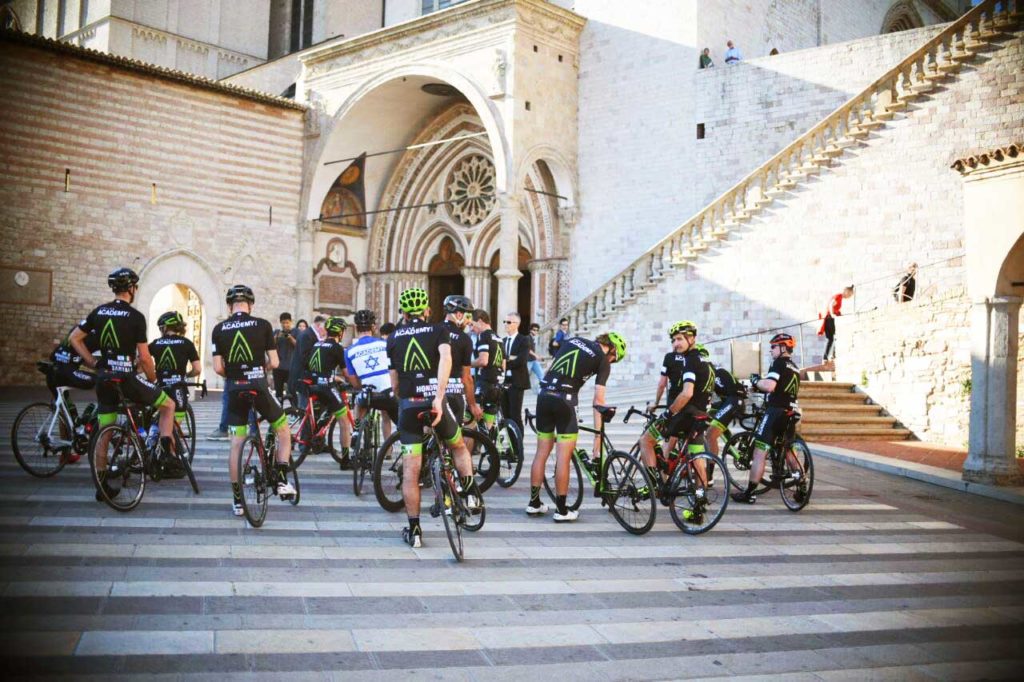 which will soon be studied in schools. My grandfather Gino, with great courage and determination, for two years (from 1943 until 1944) became part of a religious network, which was created by the rabbi of Florence Nathan Cassuto and the archbishop Elia Dalla Costa. His actions – and travels to Florence, Assisi and Perugia – served to save many Jews from a tragic fate: prison, agony and death. He carried forged documents in the crossbar of his bicycle, in a clandestine “relay”. He did this in the name of the Good, of Peace, of Justice. Bartali was not a man of words, he was a man of deeds. He was an achiever.

History and sport come together today with the Israel Cycling Academy

The meeting point is in Ponte a Ema, which is the place where Gino was born. He lived in this little village until he married in 1940. As I watch, I see the team arriving through the narrow thoroughway of via Chiantigiana, and there are women amongst the riders, finally! Together with the representatives of the Florentine organisations, we greet the group with great enthusiasm. I lead the way to the Museo del Ciclismo Gino Bartali, which has become one of my favorite places.

Some new members of the team had not yet visited the museum. I can detect both admiration and delight in their eyes. I am told that there are two possible routes, the shorter for the least experienced. It is with great pleasure that I get the chance to meet Aili McConnor, journalist and author of the book “La Strada del Coraggio”, English title “Road to Valor”. One of many books about Gino, and one that deserves to be read. 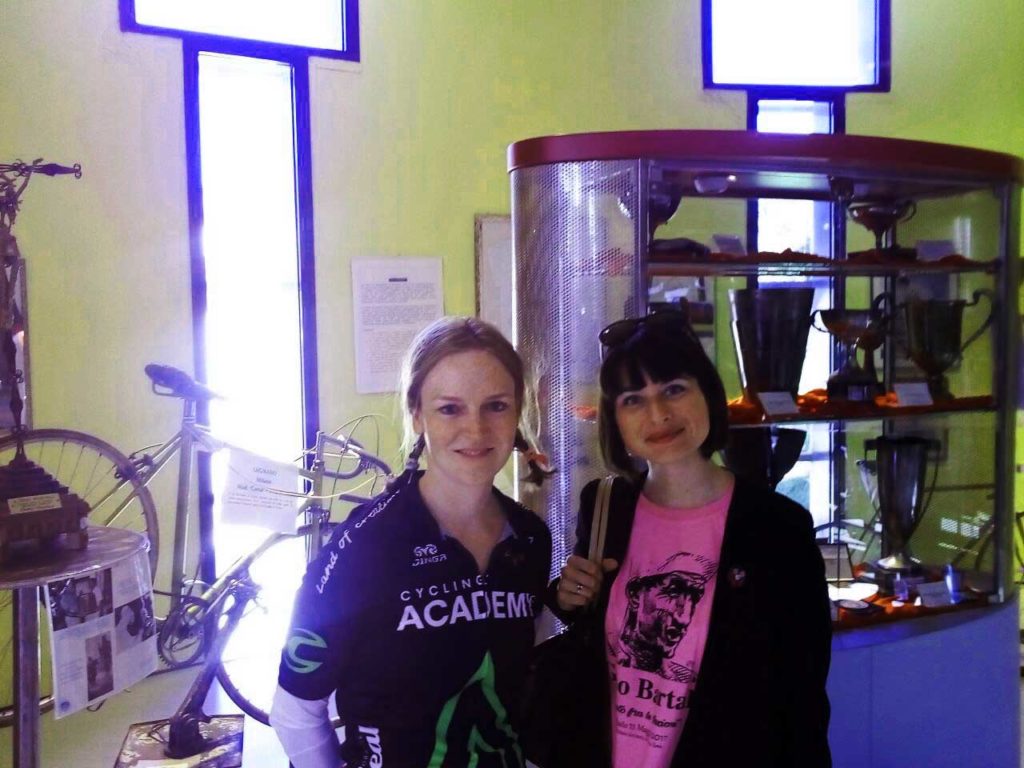 Many are now discovering his story. There are those who think of him as a mythological figure, a legend. He is seen as a hero, even though he himself would have rejected the very idea. “Heroes are people who suffer and die”, he reckoned. Nonetheless, he seems to belong to that kind of legend. He was brought up in a family of country people that held strong Catholic beliefs: their values included strong family ties, friendship, altruism and modesty. From ordinary beginnings, as a result of his fame, his charisma and his sporting talent, he became a great man.

Gino is the symbol, the champion and the icon of an “arduous” sport

that is in the course of transformation, which begins in the 1950s and endures to our own time.
I remember my grandfather as a truly genuine character, rather than a famous athlete. But now, having read about his life and work, I realize what an amazing character he was. In particular, we now acknowledge what is undoubtedly his greatest achievement: his determined effort to save the lives of many unfortunates during the war. And, moreover, his determination to keep his achievement a secret. According to my grandfather: “Good deeds must be done but certainly not talked about”.

Ran Margaliot, the Team Manager, gathers together the young participants in front of Bartali’s last bike. At this point I take the opportunity to explain the various activities associated with the museum. At the moment, anticipating the Giro d’Italia, there are many things going on.
TV networks and journalists have been contacted for the occasion. This year, the Israel Cycling Academy Team cannot be ignored. We just have time to greet Jonathan Freedman, an Orthodox Jew who lives in Brooklyn, and who is a great supporter if the program and a great fan of Gino’s.

Retrace the route Firenze-Assisi it’s a beautiful challenge. It is wonderful to see so many people engaged in a sport to which Gino Bartali dedicated so much of his energy, and to which he contributed so much during his lifetime. 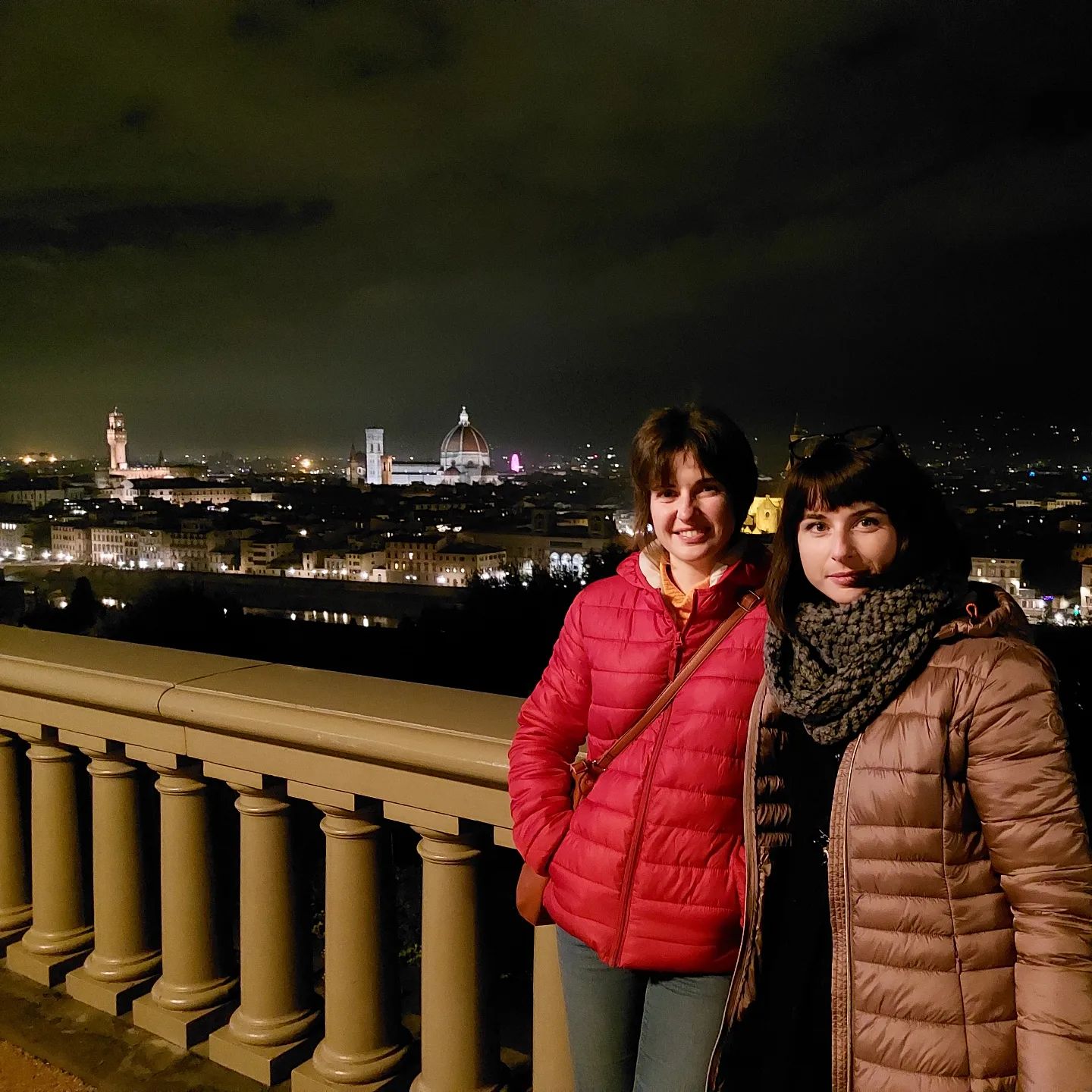