Thursday, Friday and Saturday of waiting with a lot of events dedicated to the bicycle. And on the 1st October l’ Eroica Gaiole 2017 was run. The vintage ride at the 21st edition finds its origin inspiring itself to my grandfather Gino Bartali’s enterprises, and not only. To the “heroic” cycling, tiring and genuine, lived between the two world wars that have devastated Italy. A sport sometimes cruel and desperate, but spontaneous and immediate. Passions that flourish in this edition. At the beginning, in 1997, the riders were more or less ninty. Then, there has been an exponential growth, that

has involved 7000 cyclists at this edition.

The event is growing abroad too: Eroica Britannia, California, Japan. It is curious that in some of these countries, and above all among new generations, my grandfather Gino Bartali is mostly still unknown. He has been rediscovered now that the press is giving wide information at an international level about him. In particular thanks to the last award given to Gino as “Right among the Nations” in 2013.

Once upon a time there was a boy from Ponte a Ema of humble origins, kind but stubborn.

He went out in secret to try his bicycle of fourth hand, because his father Torello prohibited him to use it. With the excuse to gain some money to bring home my grandfather started to run, and to win. And to warm the souls of the Italians, who quivered listening at the radio about his challenges with against mountains and.. Coppi. His passion for the bicycle was so innate, genuine and explosive that he contaminated immediately the hearts of the people. My grandfather was considered a source of inspiration. He was a great communicator, also when he was old, who interacting with the public. At L’Eroica we feel the purpose to rediscover this “genuine” cicling of a past time, that finds in Bartali an icon of an honest and solidary sport. 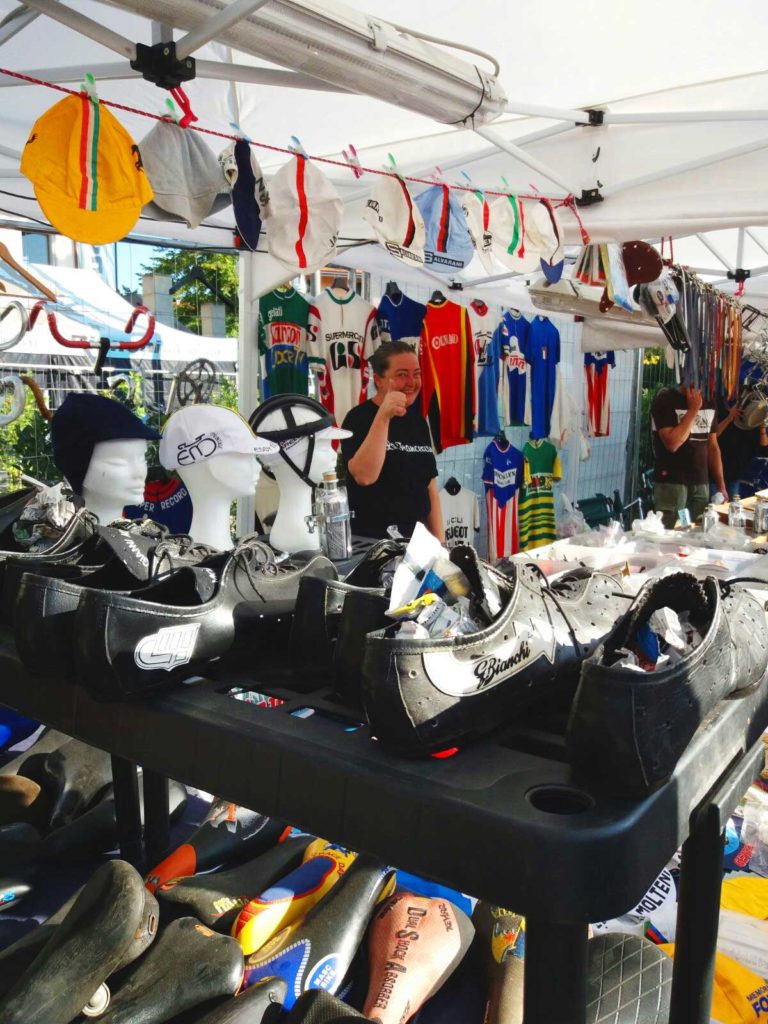 Once entered in Gaiole, together with the banner that gives welcome, the spirit of the event lives,

in every single person who with eyes full of enthusiasm is overcome by the fascination of a vintage bike. People rediscover history and an experience lived a long time ago full of positive incentives. It is a nostalgic world that meets actuality. It was clear, at least for me from the beginning, the aim of the event was to bring back to light the origins of a “heroic” cycling without frills or technology; united to the pleasure of riding through the territory with the intention of tasting its traditions and the “rustic” lifestyle peculiar to the Tuscan countryside.

At the bridge over Massellone stream it’s not possible to cross. The people who have to register to the race or to press office, the people who are collecting the race pack, those who are looking for shopping. Those who are going to the art exhibition of Miguel Soro Garcia dedicated to Luciano Berruti. To Luciano, man icon of this event and great collector of bicycles, is dedicated a Holy Mass in the parish church of the town. Giancarlo Brocci, ideator of L’Eroica, expresses affectionate words remembering Luciano, recently departed. How not to spend some words also for Gino, honorary citizen of Gaiole. He assisted to the religious function before every race. The beautiful atmosphere of an ancient taste, of “reunited village” before a big event, prolongues itself

with the blessing of the bicycles that will partecipate to L’ Eroica Gaiole.

Various are the stands disposed on the streets, a day dedicated to the bicycle that captures passionate turists and journalists. A movement of people that come from all over the world. At the dinner of L’Eroica, at my left side I exchange two words with some Chinese journalists who live in Rome, at my right side I laugh a lot at the witty remarks of some correspondents of a famous American tabloid. And, after the events that transport us into another world, Sunday arrives and everybody start his own ride:

from 46 km to 209, included some white roads and departure before down.

The most well-trained ciclysts face the itinerary of 209 km. Departed at 5 am, in the dark of Gaiole, we count also various women on the saddle of the vintage bikes, all original and shiny. Many are the participants from abroad. We go through this loved land, the Chianti. Everyone runs with his own rhythm. It is not a competition, it is an adventure. The words written on the poster that dominates the dinner remind everybody:

This is not a race to win, but an enterprise to accomplish.

It is beautiful to see a lot of young people ispired by an “old” cycling, enthusiastic in rediscovering values and dinamics. It is right to repropose the past if this is an instrument to gather people in an honest and solidary way. The visit to the Ricasoli’s cellars merits some words. In the peace of the vaults I found a magnificient exposition of vintage bicycles. A week-end rich of emotions, smiles and small surprises. Like the very beautiful picture of my grandfather at the “Eroica Caffè”. Among the earth beaten roads, right after a curve some admirers give him some water: Gino with his wet hair and dust on the skin, incarnates the “beauty of labour”.

Check out the Photo Gallery at the top page!