MY GRANDFATHER GINO MESSENGER OF PEACE: THE BEGINNING OF UNDERGROUND MISSION

Today is the Remembrance Day, a recurrence to remember the victims of the Holocaust. The journalists who knocked at our door in the past days are many, they came to find out that one more detail on Gino Bartali, peace messenger for a confused and devastated Italy. In this occasion I ‘d like to remember him telling about the most difficult months in his life. In the habit of underground courier he initially passed unobserved, but not everyone knows that afterwards

In this small umbrian town, my grandfather passed four turbulent months. He was called up to the arms at the end of ’42. He had already done his military service as an airman in 1935 in Passignano on Trasimeno. It was in the same year that he began in the professional category. This time in 1942, instead of wearing again the airman’s uniform, he was assigned to the department of the Territory of Florence. He had “pacific” tasks to accomplish, that consented Gino to keep up his training, despite there were less races to dispute. Until also Cycling had to yield to the precipitation of the events. It was a pity that, with the role of sentry at the Fortezza da Basso, my granfather unwillingly always attracted a fair crowd of curious people and admirers. He was therefore transferred to the Street Militia in 1943, whose tasks were not limited to supervision.

“I did not want to wear neither the fascist emblem at the buttonhole, neither the black shirt ”

These were Gino’s sincere words, that he maintained in the facts that followed. He went to Brescia to the General Command of the Militia to present his resignations. They were accepted without many delays by the commander, also one of his great admirer. Contestations were raised on his resignations, despite that they were regularly signed. 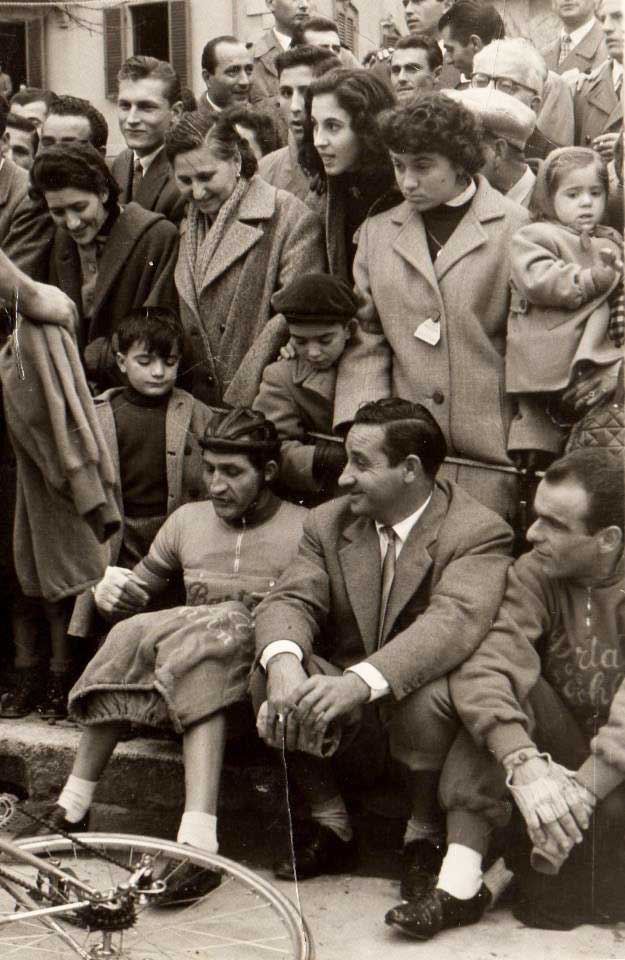 Already in 1992 Gino declared “I came to know then to be researched because they didn’t want those resignations. They remained really in few. That’s why they had rethought about that. I made as if nothing had happened and I started working with my friend Berti to help Jews to escape” Emilio Berti was one of my grandfather Gino’s intimate friends, and he was the owner of the pastry shop in via del Corso in Florence, in front of the Quarantotto store where Gino came to know my grandmother Adriana.

Bartali covered up his traces taking refuge with the family in an umbrian town, that only the name Nuvole (Clouds), reminds us of something evanescent and uncatchable. By intuition it was a beautiful place where to hide. There were only about ten families at 4 km from Città di Castello. The transfer to this town was suggested to Gino by his cousin Armando Sizzi. My father remembers him as “a short, fat man with a nasal voice. Difficult sometimes to understand..” Nuvole was Sizzi’s wife birthplace.

The Bartalis hid themselves in Nuvole at the farmer Sante Capaccioni’s house,

who gave them hospitality from August to November 1943. Capaccioni’s small property was a rural home surrounded by vegetable gardens and orchards that faced on the plain of the Tevere. Bartali wished to be called Gino Sizzi, trying to remain, at the longest possible anonymous.

At that time my journeys to Rome and Assisi started. I can speak about them now winning my natural discretion for those episods that belong to the private sphere

Gino began his underground mission during those months when he lived in Florence and Nuvole. He was called by Cardinal Elia Dalla Costa to the Arcibishop’s palace in Florence. The Cardinal together with the Rabbi N. Cassuto coordinated the interreligious net for the saving of Jews in the area between Tuscany, Umbria and Lazio. The raccomandations of the Cardinal were: “Gino pay attention. Never stop, go straight on” The documents that my grandfather secretly conserved in the frame of the bicycle, were given to him by his friend Emilio Berti, who received them directly from the Cardinal. Gino remembers in the book “La Leggenda di Bartali”:

Every week, during 1943 and in part in ’44, my grandfather departed for his secret destinations cycling for 350/400 km per day with false documents and photos that were handed to: Father Ruffino or the Bishop Giuseppe Nicolini in Assisi in the Abbey of San Damiano, and to Professor Paschetta in Rome who would transmit them to the Vatican.

Making as if he were training he passed in front of the German patrols never stopping.

During the months when he was a refugee in Nuvole Gino didn’t interrupt his saving missions. Maybe he bacame only more scrupolous, trying to prevent meeting with the Militia. Every time he took a different way from the day before. Sometimes he had to prolong the way for many miles.

A curious anectode brings us closer to the reality of those days in Nuvole, about which we don’t know much. Gino certainly needed a bicycle. Gabriele Spapperi had his known activity in the fraction of Lerchi. Talking with his grandson Gabrio Spapperi, I verified a curious anectode. “My grandfather Gabriele, of French origin, had a bicycle factory in Lerchi called Cicli Gabriele, and a cycling team too. Sometimes he resold mechanical components. I remember that he spoke with me about Gino Bartali. At that time, Gino would stop at his cycle shop to refurnish his bicycle.”

The whole coincides with a journal article where it is told that the militia shot on Gino near a control place close to Città di Castello. That time the Germans had not recognized the champion. They missed him, but they destroyed half his bicycle, in part built by Gabriele Spapperi, the artisan of Lerchi. The documents didn’t go out from the bicycle frame and the Germans then apologized for the accident. 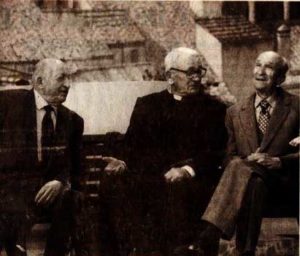 In Nuvole, to withdraw the suspects on his true identity, Gino started to tell lies about himself. If some inhabitants believed him, the parish priest Don Mariotti, one of Bartali’s passionate fans, didn’t. Among others Gino assiseted, as usual, at all the religious functions. One day Don Mariotti went to Sante Capaccioni telling him:

“You can make a fool of the whole town but you can’t fool me. That is Bartali!”

His profile was too characteristic, a part from his very muscular legs. The priest, less cunning and too curious ended up by revealing Gino’s identity in front of a group of villagers. My grandfather was obliged to escape. First towards Rome, then because of an interrupted street, he took refuge in Siena at Don Bruno Franci’s. In these places Bartali waited anxiously for his cousin Sizzi to arrive who brought him food and money. Sizzi had a bicycle accident and Gino not seeing him coming went out into the street, unfortunatly meeting the Militia. He was arrested and brought to the barracks of via della Scala in Florence.

I was questioned and taken into prison. After a week passed in a cell, during one of my periods of leisure outside, the captain looked at me and said: But you know that you look like Bartali? Who put you here?

Once again in freedom Gino “peace messenger”, continued his mission also after the 11th August 1944, day when Florence was freed from war. In September of that same year he freed 49 English soldiers who had taken refuge in Villa La Selva in the hills of Bagno a Ripoli. Recently it has been discovered that he secretly gave hospitality to a family of Jews, the Goldenberg, in the cellar of his house for almost a year. 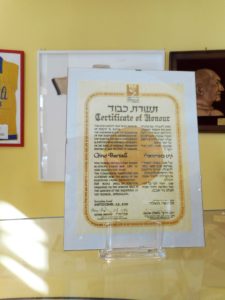 Gino came back to Città di Castello when he competed the last race of his long career in 1954.A very beautiful photo of that race (on top) shows us all the enthusiasm, the affection and the curiosity of the people towards Gino, who only after the war had ended, came to know that they had given him hospitality in their houses. Bartali, who had continued to train, kept on winning: in 1946 the Italian Tour and two years later he won the Tour de France. Gino Bartali: Gold medal for Civic values and Right among the Nations. Gino, peace messenger, who didn’t search for praises nor medals:

I did only what I could do better: to ride by bicycle.