July 1948, July 2018: exactly 70 years have passed since what we can consider the biggest sporting challenge in history. 30th June 1948, we are at the Tour de France and the cycling fans are about to assist at something incredible. The Italian team consists of 10 cyclists at the starting point, apart from Gino Bartali there are Bevilacqua, Biagioni, Corrieri, Cottur, De Santi, Feruglio, Pasquini, Rossello and Volpi. A cycling team that somebody will define “not worth a penny”.

The first stage goes from Paris to Trouville: 237 km of flat route, not ideal to climbers. But Bartali is not only a climber, he is a complete rider, able to fight with the best sprinters in the world. He wins in the sprint on Schott, despite a puncture, after having recuperated the group.

Life keeps going on after the II World War. Coppi and Bartali compete on pedals while Italy is being reconstructed. Gino won the Swiss Tour and the Giro d’Italia in 1946, the same year when my father Luigi was born. In ’47 Coppi wins the Giro d’Italia in front of Bartali. And then the Tour de France 1948 arrives. Alfredo Binda, technical coach, at the race start advised Gino to be prudent: “Go slowly, lets think that you are old to fight, in order not to have everyone on your back at the beginning.” It was Gino’s Tour, the Italians Tour and the first year for the loyal “Giovannino” Corrieri as team mate of Gino Bartali.

“Gino what are we going to do tomorrow? ” Corrieri asked me. “Nothing. We go to Lourdes and we pray Our Lady…” 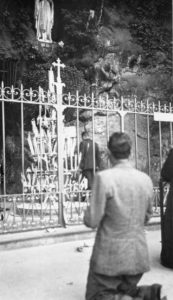 The following stages stop every enthusiasm. The French, guided by Bobet and Lapebie, are unbridled and gain minutes and minutes, giving Bartali the 28th place at 22 minutes from the yellow jersey Bobet. Everything seems lost, and the journalists, who have already defined the Italian team “not worth a penny”, don’t loose occasion to judge:

“Bartali you are old! At 34 years old we cannot expect anything from you”

He is the iron man, whose will overcomes his trained legs to the labours of cycling at every curve. He is the giant of the mountain, the good giant, who had bluffed the Nazi militia only four years before with his silent routes… Nobody, at the time of the Tour de France 1948, could suspect it. In ’43 and ’44 Gino has accomplished a great silent mission. Many had been his journeys from Florence to Assisi and Perugia, and then arriving in Rome, secretly transporting the documents to let thousands of Jews expatriate. During the II World War, with the excuse of having to train, my grandfather had run great distances. He had not lost his physical shape, nor his enthusiasm!

What happened exactly in those days? They arrive to the Pirenees. Bartali wins the seventh and the eighth stages, the Biarritz-Lourdes and the Lourdes-Touluse, arriving 14th in the general ranking and 8th at the end of these two stages. Gino is 9th at 11 minutes and 48 seconds after other three intermediate stages. We are at the twelfth stage, the Sanremo-Cannes. Bartali and Bobet face together the Col du Turini. In a moment everything is lost! Bartali had a puncture because of a nail.

Bobet springs and wins the stage, with a distance from Bartali that sound as a sentence:

more than 8 minutes, taking his advantage on the Italian of 21 minutes and 20 seconds. Everything is wrong, everything to redo! There are only nine stages at the end, and many Italian journalists go back home: “We had told you that it was an utopia! How can you wish that a man 34 years old could win such a tough race?” 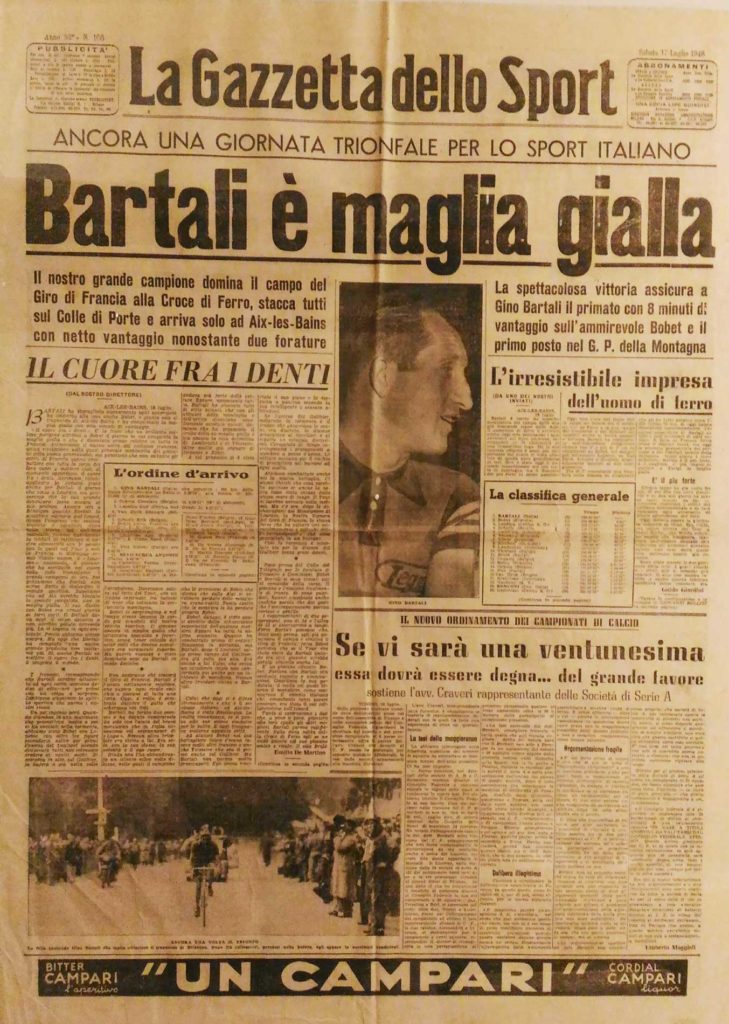 It was the 14th July, the anniversary of the Bastille day. Day of national holiday and rest for the Tour. In the streets there were many journalists with bags under arms But they don’t go all away because of Gino: “They call us from Italy. This morning there has been an attempt on Togliatti’s life”. While in France it was holiday, in Rome, that hot summer morning, a tragedy has touched. Domenico Antonio Pallante, 24 years old, from Catania and obsessioned by Communism, shot at Palmiro Togliatti, leader of the PCI ( Italian Communist Party). Seriously injured, Togliatti was brought to the hospital. CGIL proclaimed a general workers’ strike.ra il 14 Luglio, l’anniversario della presa della Bastiglia.

Drammatic hours for the Country. The civil war is feared.

The same evening in the hotel the phone rang. It wasn’t Adriana, as my grandfather hoped. “Do you recognize me, Gino”? Of course, you are Alcide”. The President of the Italian Counsel, Alcide De Gasperi, called his friend Gino asking hime for a great help. They had met some years before, when both were in the Azione Cattolica group in Florence.

Are you thinking of winning the Tour?

I wouldn’t know Alcide, is still missing a week. But I will surely win tomorrow’s stage! 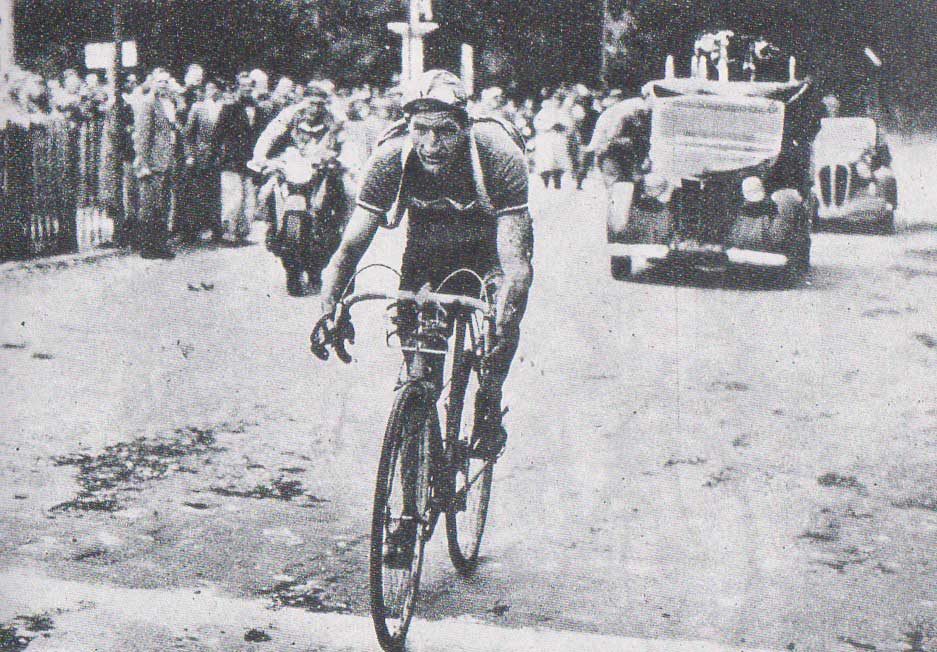 And here are the Alps, three alpine stages. These stages will reveal the truth! We begin with the Cannes-Briançon, there are the Allos, Vars and Izoard to climb. Robic attacks on the first hill, the weather is one of the worst. It rains and it is cold. A cold that makes the limbs stiff, it is an ordeal for everyone. Cold and rain that enter in the bones and block the muscules. It’s in this moment, with these weather conditions, that Bartali attacks and leaves everyone astounded!

On the second difficult ascent of the day he dashes off alone to catch Robic, he reaches him and surpasses him in the descent. Bartali’s attack is not only a simple sprint. Bartali is furious for the unjust critics received, and he vents on the pedals all his rage. The cold that clutches the others doesn’t affect him at all. When Bobet crosses the race arrival, Bartali is already in his hotel!

Gino had already won on these streets, exactly ten years before. And now somebody asked him a new challenge, a miracle. His victory unleashed a general enthusiasm in Italy and it mitigated the revolt. -Togliatti’s operation succeeded perfectly. Everything seemed to settle in.

A triumph that soothed the souls and changed the history of Italy.

The challenge is already legendary, Bartali recuperates more than 20 minutes in only one stage and brings himself to only 51 seconds from the yellow jersey. That distance, that everyone thought unfillable is filled! Everyone is incredulous, and maybe many of the journalists who had defined Gino “dead” still believe that Gino will pay the effort on the following days. But they don’t know what is about to happen.

“Guys – I said to my team-mates Corrieri, Bevilacqua, Pasquini and the others – the French are going to attack us today, we have to show that we don’t fear anybody. It’s necessary to ride fast from the beginning to tire them, then I’ll take care of the situation! I drank a coffee and I smoked a half cigarette that gave me some energy, and then we arrived all together the starting point.”

The following day there is another terrible stage on the mountains, the Briançon-Aix Les Bains, of 267 km. Five slopes to climb: Galibier, Crox de Fer, Portet, Cucheron and Granier. They are not all asphalted roads, and the weather is bad, as the day before.

It’s snowing on the Galibier and the riders are tired after all these kilometers.

Champions of the calibre of Bobet, who later will win three consecutive Tour de France, and Schotte who in the same year will become the world champion, start to get tired. But not Bartali! For him, the tyring day that has bended Bobet, Schotte and Robic are only the warming up. For Gino the Croix de Fer tests the rivals. He wins the G.P.M. ( Gran Premio della Montagna)  and he is already virtually yellow yersey.

My grandfather Gino usually trained in all weather conditions. My father Luigi told me that one winter Firenze was struck by a great cold. Gino was riding the bike and one of his friends driving the car saw him and he shouted at him through the window ”Gino, what are you doing? Jump in the car! Don’t you see that it is snowing?” And he replied angry: “I see, that’s why I am training! I won’t ever know if during the next race it will snow, it will rain or if it will be good weather.”

The attack on the Portet is an earthquake. Bartali is unbrindled, and while his rivals trudge behind him, he climbs the mountain at an impressive rhythm. He gains one minute per km and he recuperates 8 minutes of advantage from the pursuers. Bartali finishes the stage with an extraorinary average time of 27,669km/h.
Incredibly, and against all predictions, he is wearing the yellow jersey! 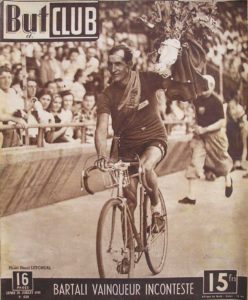 “I was already on the podium, when Ockers arrived after 6 minutes. Sixth Bobet after 8 minutes. He was crying. The yellow shirt was finally on my shoulders.

The remaining stages are a formality. Nobody can only imagine to attack Bartali, who wins the following stage Aix Les Bains-Losanna. He had 22 minutes of disadvantage before the Alps, it was impossible to recuperate, everyone knew, everyone exept him: Gino Bartali. The eternal, the iron man, the only one to have won the Tour de France with 10 years of distance one from the other, doing the greatest sporting enterprise of history!

We have wanted to run through again the main stages of the Tour de France of 1948, that will remain in the history of Cycling and of Italy. I thank Fabrizio Caliendo of Milan, a great fan of cycling and Gino’s fun, for his collaboration. The main script is his production, alternated with my paragraphs in red and other citations of Gino, taken from the book “The Legend of Bartali” by M. Lazzerini and R. Beghelli

Don’t miss the Photo Gallery at the top!