RESTORATION OF MY BARTALI ROAD BICYCLE OF THE SEVENTIES

Experience, passion and team work have been the ingredients for an excellent restoration and restyling of my Bartali bicycle, the last arrived in the family. Some months ago I found out that a guy wanted to get rid of his road Bartali bike, with which he competed when he was young in the Seventies. You do not often see around small frame of my size (50 cm vertical tube x 52 cm horizontal tube) and espcially of this brand, dated back to the time when my granfather Gino tested his ability in the bike business.

Despite the very bad conditions of the bicycle, I decided to arrange this investment, urged also by the enthusiasm of Marco of Pedale Vintage 4G team who manages to transmit a great passion for these pieces of jewelry of the past. We thought that this very used “Bartali” only needed a great restoration to come back to its proper conditions, instead we also had to make

restyling of my Bartali bicycle intervening on the frame and its mechanical components.

As you can see by the photo below, the bike was badly conserved. Once it was delivered by the courier we realized we were in front of a real wreck! The pictures, sent by the previous owner, were misleading regarding the state of preservation. Moreover the copper coloured frame hid well the rust effect accumulated in time. The images that you see in the article speak by themselves. 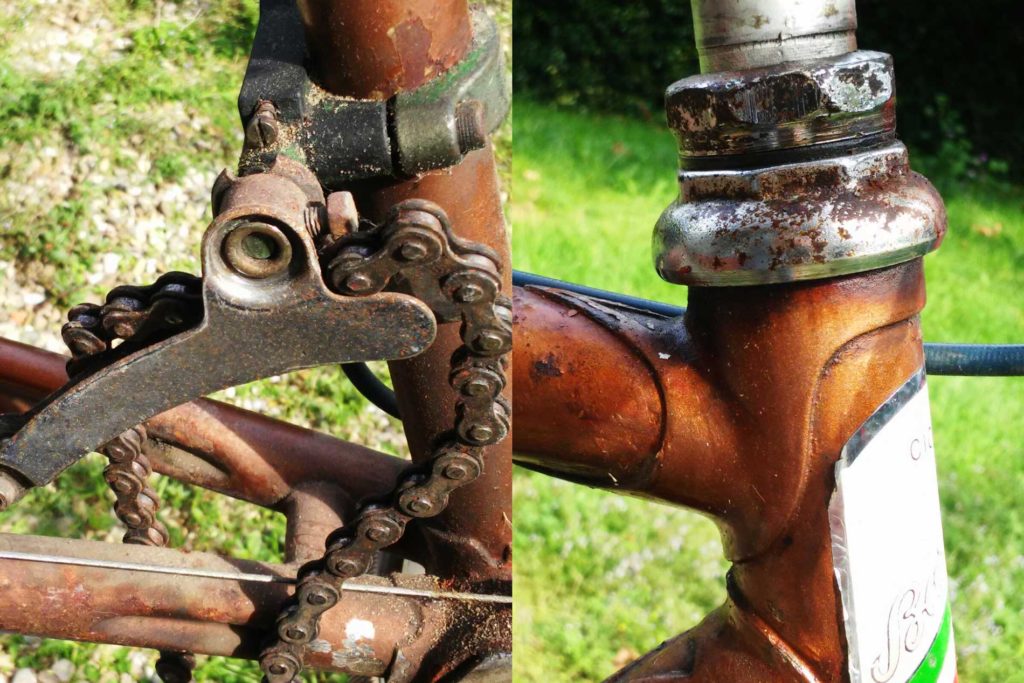 Rust situation was unmanageable. Even if for the Bartali of the Seventies previously bought we opted for a meticulous restoring intervention, erasing a great part of the rust, this frame was in worse conditions. It was destined to return to shine again. The idea to rebring to light a Bartali in its yellow original colour, with fresh transfers and renewing the mechanical components, prevailed .

Once sand-blasted, the frame has been plastered to remove every imperfection on the surface. 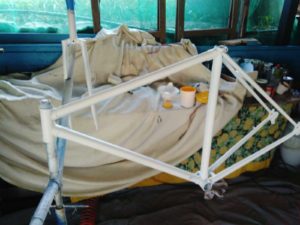 As Alessandro of Ciclostile Fanchiotti frame builder and expert in varnishing explains to me, the rust had penetrated so deep to ruin the frame in many points. The bike has been first treated with sand paper to lessen the effect of the intervention of the sand blasting, that leaves the surface porous, and afterwards plastered where necessary. It has been a real team work to give new life to this bicycle, keeping faith to the original components of the Seventies , but renovating its aspect.

One hand of white antirust paint has been given to the frame and then three hands of yellow varnishing. I used the same yellow colour identical to the old varnish found in the garage. The well known “yellow Bartali”. Once prepared the dye I left it together with the frame in Alessandro’s laboratory.
After the varnishing, a finishing with a bright transparent solution has been necessary and, at last,

we could apply the Bartali decals from 70s.

My father Luigi had luckily kept a pair of intact decals Cicli Bartali for all these years! The frame has come back to Marco’s hands who continued restyling the bike. We checked what we could save. Only brakes, brake levers and center movement survived years of humidity, rain and disinterest. Also the wheel rims could be saved but I decided to invest some money more finding a pair less used, that could fit with the new brillant yellow frame. Handlebar, handlebar connections, shifter group, saddle, saddle tube, dampers, brakes wires oand sheaths have been substituted. 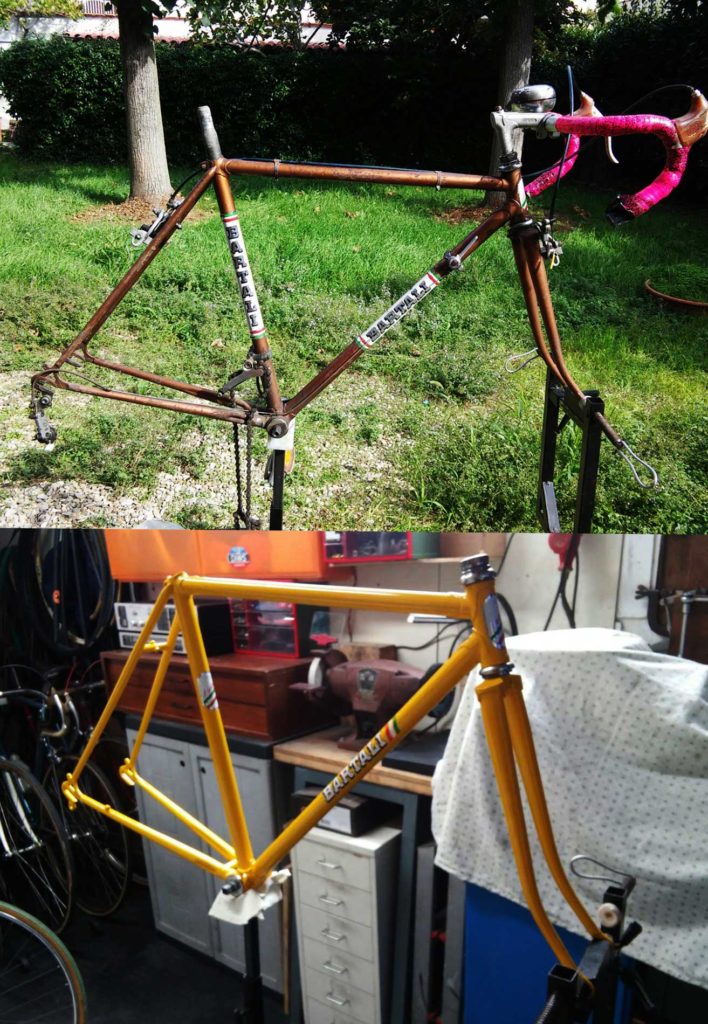 have been recuperated always thanks to my father’s help, from what has been left of his old Bartali bicycle. The story is curious. My father assembled an urban handlebars and pedals without belts on his road Bartali bike, that he daily used to go to work. For greater comfort. One evening he gave it to a friend who was without a car due to a technical failure. This man never gave it back to him. Maybe he was not a true friend…So only the handlebars (from which I have taken for the ribbon) and the pedals (which I entirely took) remained of his bycicle. I’m very happy to have on my Bartali components of the bike that was owned by my father. 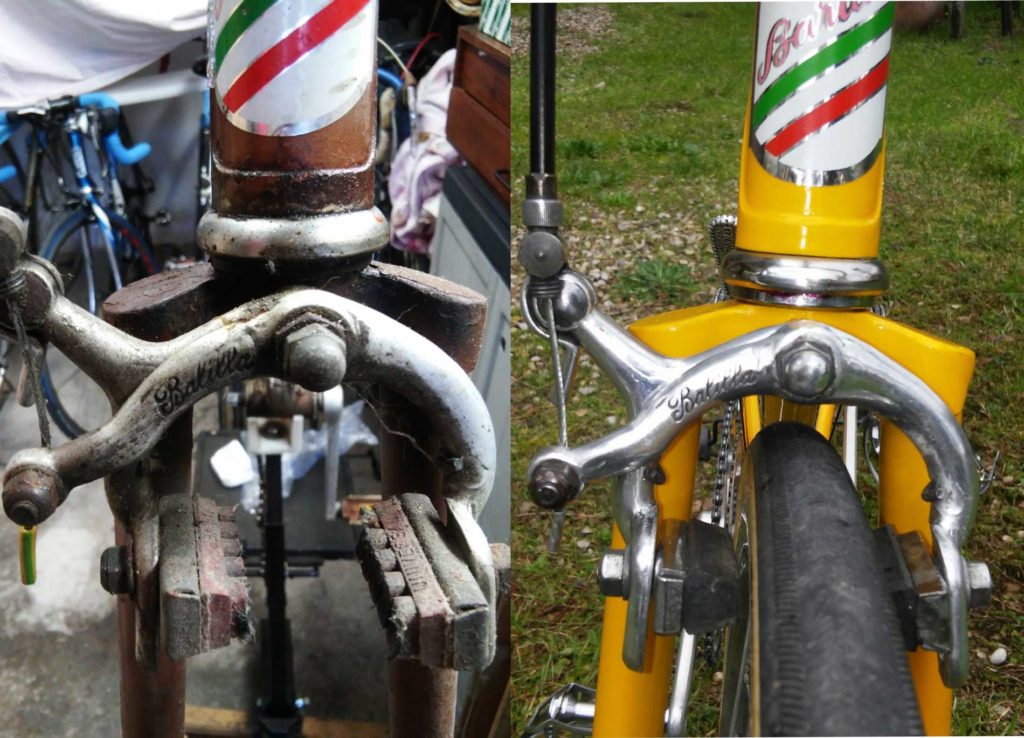 Very involved in the customizing the bicycle, we opted for all the details in black colour. The small belts of the pedals are on tone with the dampers and the leather saddle. The handlebars, too large for me, have been substituted. Behind a restored bike there is a great work of

research for the components in fairs and vintage markets

The pieces still in good consition have been put in a oil bath, and afterwards cleaned with proper brushes to erase every layer of rust. All components were greased and meticolously reassembled taking attention not to lost the small parts. Also the wheel tubolars have been recuperated from another bicycle. Once the bike has been assembled…I saw the great work done and I was very excited. A surprise awaited me: the signature Lisa B. on the frame (photo in the gallery above)

Five months ago this bike was a wreck, and now it’s back to shine in perfect “Bartali style”! 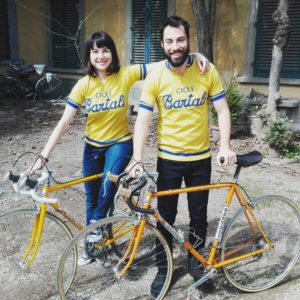 Look at the Photo Gallery !