How many precious activities in our Florence. My intuition tells me that “Ciclostile Fanchiotti” will be for sure a great discovery! A craftman of bicycles. I’m more than curious…I’m enthusiastic! Alessandro, who daily does another work, warmly invites me to visit his laboratory. A passion, the one of the bicycle, that is transforming itself into a real job. He has his laboratory, where he manually build frames as it used long time ago.

Piazza Brunelleschi is one of those squares that is a bit hidden, known for the Univeristy of Literature and Philosophy. A small door, from which appears the profile of a light blue bicycle tells me that I am in the right place. I descend through a stairway that makes me enter into Alessandro’s world: bicycles, history, passion for unique things created manually. Apart from reparing and restoring bicycles, he builds here steel frames manually!

The bicycle of a green colour is composed of a steel joint frame, with Columbus cromor OR pipes, steel fork with a flat head, a mixed group Shimano with strong controls Ace 7800. Shimano derailleur. Rims with hubs Shimano, mechanical disks with 180 front rotors and 160 back brakes Avid. Bicycles is thought for long journeys, with connections for package trucks and pump trucks under the horizontal tube. 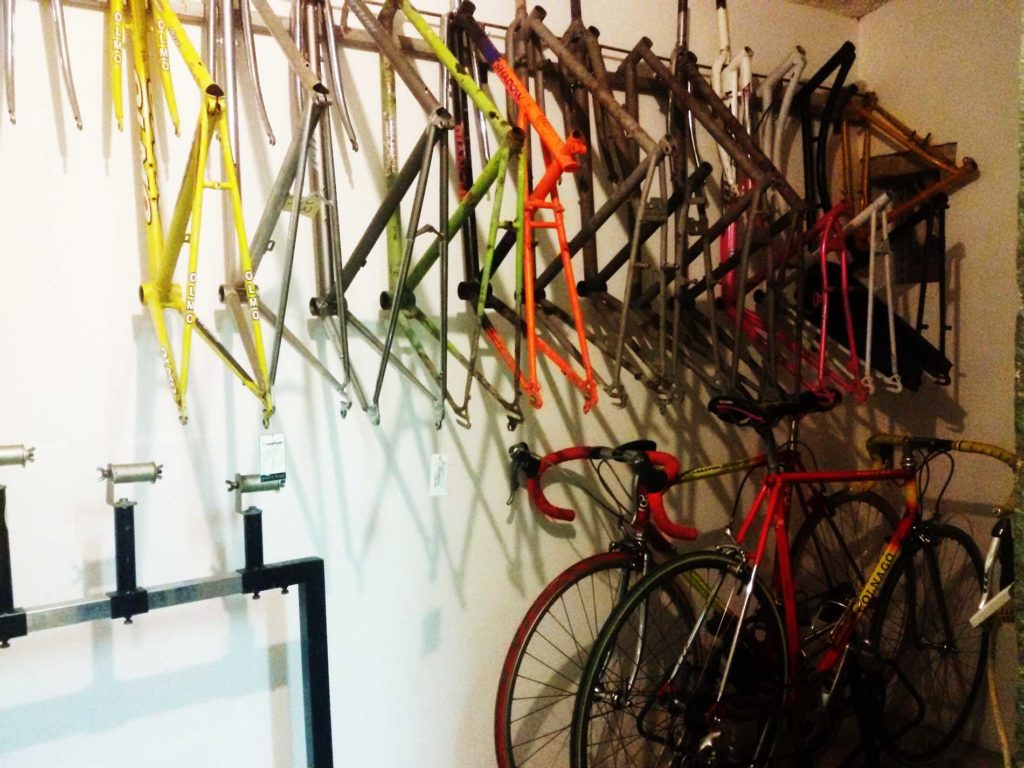 In the “Ciclostile Fanchiotti” laboratory I felt like at home. Between a machine and another there are historical relics, stamps, photographs…and an huge poster of Bartali and Coppi who exchange the famous water-bottle. In the central room, the beating heart of the bike repair shop, the measures of the pipes more adapt to the client are defined. The steel tubes are cut, shaped and then bound to the conjuncions through a brass welding. The frame weighs around 1,6 kg. Once ready Alessandro proceeds in setting up all the rest (pedals, fork, shifter, wheels, brakes cable, drive chain..) until the complete realization of the bicycle.

A tailior made bicycle, that keeps a timeless character!

The style of the bicycle that will be created is of classic style, but a bit vintage. The frame model is not so different from the bicycles that my grandfather Gino Bartali used. Steel was the principal material used in the production of bicycles until the Eighties. Afterwards aluminium began to spread, and then by the years Two thousand, carbon fibre has become very used. This last one is principally destined for the race bicycles, that need to be light and resistant. Not everybody can afford a carbon bike.It is true that Companies need expensive equipments, but they also make very high mark-up, despite the production is in series. The frame is in this case built by a mold, where the carbon is disposed and then put in an oven.

To ride in town, or to make excursions out doors, it is not indispensable to have a carbon bicycle.

Professionism is needed, to have an high level performance. This concept is an integral part of Alessandro’s philosopy. Moreover, he explains to me “I would like to create that timeless object, that recalls a classic style but not old fashioned. I woukld like to be able to work on this project modernizing some mechanical components or installing a good shifter 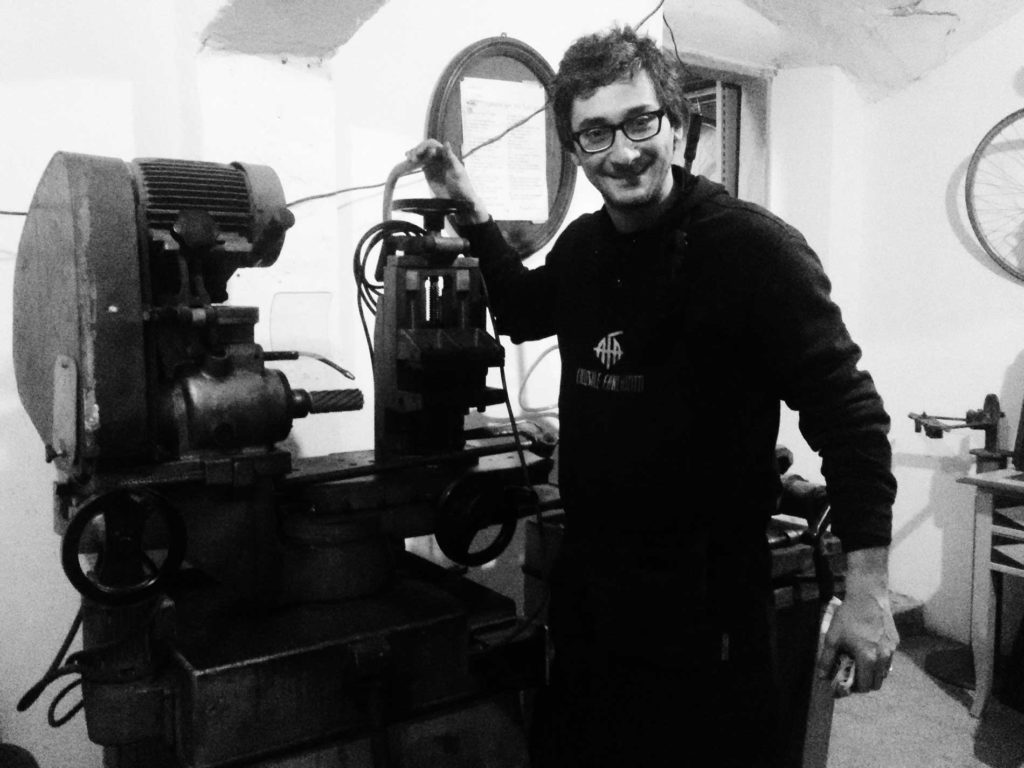 I like the approach to the project very much! The colours of the frame paint (green, light blue and orange) as the logo “Ciclostile Fanchiotti” itself, underline a vintage character. At the same time, the client have a bicycle completely new, that is made with modern requirements. What better? This handcrafted laboratory is the proof of how the hand made florentine market is not exclusively “leather, gold and ceramic”. We also build bicycles. It is true that the craftsmanship of bicycles, or framist, is a job nowadays more unique than rare. Good luck Alessandro for your beautiful project!

CYCLING IN NATURE: IN SEARCH OF GREEN SPACES IN TOWN

ARTECICLO: WHEN THE BICYCLE HAS A MULTICOLOUR SOUL

COPPI AND BARTALI.. AND THE WATER BOTTLE