THE ENTERPRISE OF THE NOVA U.V.I. : THE COMMEMORATION OF THE FIRST EDITION OF GIRO D’ITALIA 1909

It was the 13th May 1909 when the Giro d’Italia started. 127 cyclists participated. Only 49 managed to finish the race. The winner was Luigi Ganna, the “King of the Mud”. Nickname that gives us a fearless image of the aforesaid cyclist, a dominator of the most severe climatic adversities. The Nova U.V.I. ( Itaian Velocipedistic Union) composed of powerful cyclists ready to challenge the 397 km of the race, gathered together on the 13th May of this year in the exact point, at the exact hour when the first edition of the Giro d’Italia left.

Piazzale Loreto in Milan. Time 2,53 am. Racing at night, with poor lighting,

the first stage  Milano-Bologna of the 1909 Giro is lived again. Milano – Bergamo – Brescia – Verona – Vicenza –Padova – Ferrara – Rovigo – Bologna. The rules are rigid, respecting the historical identity of the first lap of the Giro. The bicycles of the racers are rigorously antecedent 1909. The clothing are as close as possible to that time: wool jerseys, old caps, leather and knit gloves. Six stops in the whole journey, with genuine food, chicken and bananas instead of integretors.

Our “Heroics”, leave the dark and at dawn they continue to cycle on the road, the same as 108 years ago! 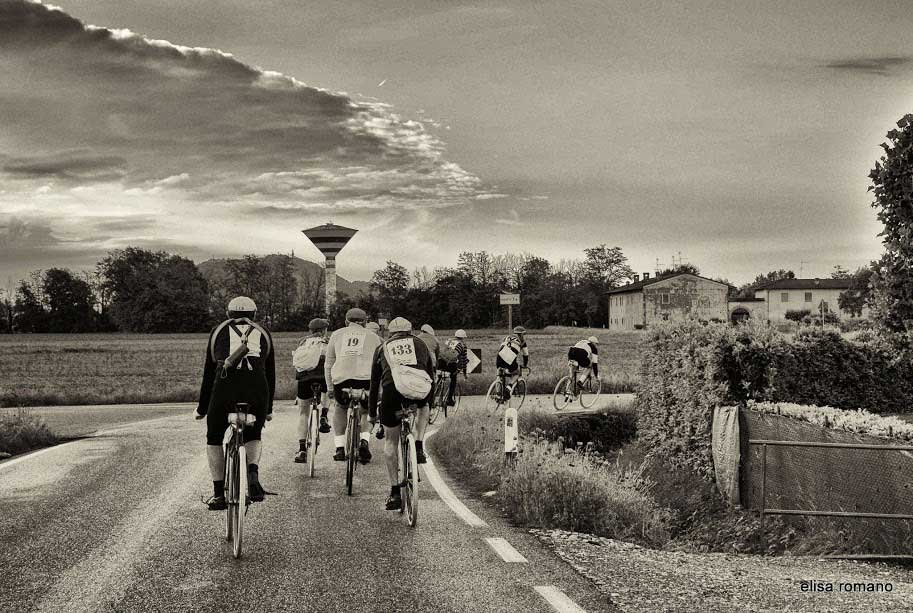 They exchange a few words, two laughs thinking about the day before. About the Friday of the bicycles punching in Milan. About the friendly dinner among friends, organizators and…an unusual guest. In the middle of the dinner a bearded man gets up and presents himself: “Nice to meet you, Luigi de Gregori”. Brother of the famous italian singer Francesco De Gregori, not only, but also a great bicycle lover. After a few anecdotes, he takes out his life companion; an acustic guitar, together with its “collegue” amplifier.

He starts to strike up the folk ballad “The bandit and the champion”,

dedicated to Costante Girardengo and his cocitizen, the anarchic Sante Pollastri. After having slept only 5 hours, for our reckless heroes, the adventurous journey on a vintage bicycles with the a fixed pinion and a hand brake begins! The energy that the people of Verona emanate is their doping. As soon as they are close to the doors of the old city, a crowd waiting for the group explodes into incitements and cheers.The Padova Refreshment is organized by the same society of the first stop in Giro 1909 “S.C. PADOVANI”.

The 13 participants face the 397 km among unexpected technical problems,

as for example various tire perforations and metereologic misfortune. A storm breaks out, while the cyclists arrive in Ferrara, but despite the perils of the bad weather they go on and meet the people already fill the roads to celebrate the Ferrara soccer team that passed in Serie A.

Finally the arrival in Bologna, after 18 hours of ride!

20 hours in total between the journey and the stops. They had left at 2,53 at night and arrived at 23 of the following day. An enterprise by fearless people, made of the will of testing themselves, to face their limits and to surpass them. The passion for the bycicle that binds to the soul as a glue, and carves an unforgettable emotion in the heart. They feel each other close now, to that far 1909, to that genuine and tiring cyclism.

The first thing that I thought, when a night at dinner the NOVA U.V.I. told me about the rievocation of the first edition of the Giro d’Italia was: “How foolish!..How great!”. To challenge themselves, to find the strength. To fight one’s own shadows, their own limits, to arrive to the goal.